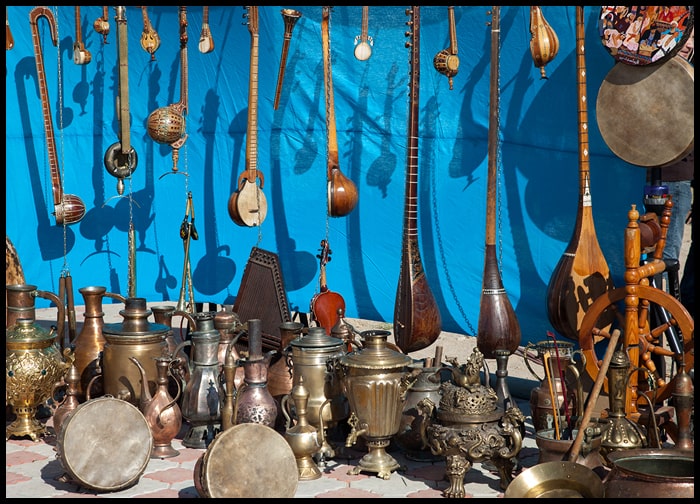 Day 1: Tashkent
Upon arrival, our friendly guide will meet you and drive to capital city to start your tour in Uzbekistan. This day you will explore modern city and its most interesting sights. The first place to visit will be Independence square. It is known as the main square of the Uzbekistan that was made as a symbol of victory over fascism in World War II. You will have a tour on the local Broadway to the Square of Amir Timur. Do not miss the opportunity to visit Tashkent subway, which is considered to be one of the beautiful metros in the world. It has been serving to city residents since 1977. After it you will enjoy the beauty of old part of the city where Chorsu Bazaar, Kukaldash Madrasah and Hast Imam complex, which includes many madrasahs, mosques and mausoleum are located. The highlight of the tour in Uzbekistan is the world's oldest Quran copy of the 8th c. Othman who was owner of thi copy was killed by non-muslims in 8th century. His blood can be seen even today on its pages. Night is in a hotel.

Day 2: Tashkent- Nukus (morning flight)
In course of the tour you will have a morning flight to Nukus.Upon arrival you will start to excploe the fascinating dights of the city. The first sight to explore is the Museum of Savitsky where you will have an opportunity to see the masterpieces of forbidden art of 20th century Russian avant-garde paintings. You will enjoy works of Sokolov, Komarovskiy and Amaravella group. During the excursion you will learn that the head of the Karakalpakstan state museum of art start to gathered their work by buying them or getting for free in 1960s. After sometime he finally exhibits them in this remote central Asian art-house. Next sight in tour is Mizdakhan necropolis which used to be an ancient city centuries ago and was constantly captured from the 4th century BC till about 14th century AD. Night is in a hotel.

Day 3: Nukus - Kungrat - Sudochye - Aral Sea (420 km, 9 hours)
You will have a full day drive via remarkable route: Nukus - Kungrad - Plato Ustyurt - Sudochye Lake - Aral Sea. During the way you will explore the Gaur-Kala Fortress of 4th century B.C. The name of this prominent sight can be translated as the "fortress of the infidels". Even through his sight possesses walls of ten meters with strongholds it is impossible to say for sure what kind of buildings they were. Upon arrival you will have time to explore surroundings. Overnight is in tents.

Day 4: Aral Sea - Muinak - Nukus (440 km, 9 hours)
On the route you can take a lot of vibrant photos during whole day. In course of the tour you will travel via the picturesque canyons of Ustyurt and then to Muinak. The road to it will go through the dried bottom of the sea. Upon arrival you will be amazed to see the perfect example of the ecological disaster in the region. The town used to be the largest Karakalpakstan's port and Aral Sea center of fishery. After it you will have an excursion on the graveyard of ship in ex-shore of the Aral Sea as well as the town museum. Then you will head on to Nukus. Overnight is at the hotel.

Day 5: Nukus - Ayaz Qala - Tuprak Qala - Khiva (290 km, 6 hours)
In the morning, your tour will continue to the visit of the remains of ancient city in Uzbekistan. Here you will enjoy the beauty of history and sites. The story of the city goes back to legendary Khorezmshah's State. According to the 10th century documents, Khiva was one of the major cities along the Great Silk Road. It was usual picture to see endless caravans that passed through the town gate from the morning till down. You will be impressed to know that it was preserved and cherished by generations. Ayaz Qala and Turpak Qala are next sights to explore for today. According to old folklore, it was named for the honor of brave slave warrior Ayaz. The foundation of the castle goes back to II century AD. Another fortress Tuprak Qala was established in I or II century AD and stand until 6th century. You will be impressed to know that Khorezmian leader Artav used it as a palace but constant wars destroyed the city. Night is in a hotel in Khiva.

Day 6: Khiva - Urgench - Tashkent (flight)
As you probably know, Khiva is the oldest city among others in Uzbekistan. This city possesses one of the significant sights in tours to Uzbekistan, the Ichan Qala. It is the inner city of Khiva that curved with strong walls. Travelers can enjoy to see the centuries old sound buildings, palaces, mosques, Madrasahs, Mausoleums, Minarets, Caravanserais and Bathhouses. Ichan-Qala possesses more than 400 traditional houses and about 60 architectural monuments. During the tour you will learn that it became a historical and architectural conservation area in 1969. Don't miss the chance to visit the Kunya-Ark fortress that was found by Muhammad Arang Khan in the 17th century, Kalta Minor minaret and Tash Khouvli palace, an incredible sample of Khorezm architectural mastership of 1830s. Flight to Tashkent Night is in a hotel.

Day 7: Tashkent - Flight
Your guide accompanies you to the airport.