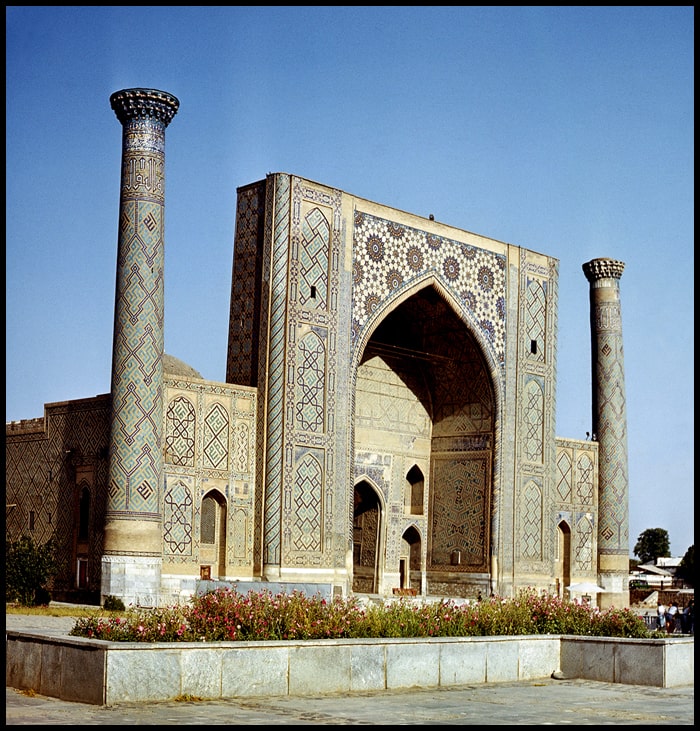 Day 1: Tashkent
Your guide will meet you at the airport and transfer to the city to begin your travel. Full day is devoted to a sightseeing tour in Tashkent, capital of Uzbekistan. It includes a visit to the main square of the capital that was made as a symbol of victory over fascism. You will enjoy exploring the local Broadway. It is a street that separates the Independence square and Amir Timur square. Next destination of the tour is visiting one of the most beautiful metros in the world. The operation of this subway has begun in 1977. In the afternoon you will be able to see the old part of the city where you will see Chorsu Bazaar, Kukeldash madrassah and the Hast Imam complex, which consists of several madrassas, mosques and a mausoleum. The main part of tours to Uzbekistan is the world's oldest Quran copy dating back to 8th c. Quran belonged to Othman Ibn Affan, the Third who waasmurdered by his enemy in 8th century. His blood still can be find on the pages of the book. Night is in a hotel.

Day 2: Tashkent- Nukus (morning flight)
The day will start with flight to wonderful city of Uzbekistan. Upon arrival to Nukus you will have a guided city tour. Museum of Savitsky will impress you by its masterpieces of forbidden art of Russian avant-garde paintings from 20th century. You will enjoy wonderful works of Sokolov, Komarovskiy and Amaravella group. All this works were gathered by the curator of the Karakalpakstan state museum of art in 1960s. After sometime he finally exhibits them in this museum. After it you will visit Mizdakhan necropolis that used to be an ancient city centuries ago. By being constantly captured from the 4th century BC till about 14th century this city was destroyed. Overnight will be in a hotel.

Day 3: Nukus - Kungrat - Sudochye - Aral Sea (420 km, 9 hours)
In course of the tour you will travel on the route of Nukus - Kungrad - Plato Ustyurt - Sudochye Lake - Aral Sea all of it will take 9 hours. You will have a stop to visit the Gaur-Kala Fortress ("fortress of the infidels of the fourth century B.C. You will be amazed to know that from all of this sight survived only walls of ten meters high and a few strongholds. Even nowadays it still impossible to say what sights they were. Upon arrival to Aral Sea you will have some free time to enjoy the surroundings. Night is in tents.

Day 4: Aral Sea - Muinak - Nukus (440 km, 9 hours)
Today you will have a great opportunity to take a lot of vivid photos of nature. The day will start with visiting the canyons of Ustyurt as well as heading on to Muinak through the dried bottom of the sea. You will be amazed to see the example of the ecological disaster. This sight was the largest Karakalpakstan's port and Aral Sea center of fishery. Moreover you will have a wonderful excursion of the graveyard of ship in ex-shore of the Aral Sea and town museum. Transfer to Nukus. Overnight is at the hotel.

Day 5: Nukus - Ayaz Qala - Tuprak Qala - Khiva (290 km, 6 hours)
Your tours will continue to the oldest city of Uzbekistan -Khiva. The city is rich in both ancient culture and surprising history. The history of the city closely related with the Khorezmshah's State, whose capital was Urgench town near Khiva. According to the 10th century writings, Khiva was most prosperous city along the Silk Road. Long caravans that went to China and back stopped here. Ayaz Qala and Turpak Qala will impress you by its magnificent. Ayaz Qala (I or II century AD) was used as a fortress during Khorezm State. The name of this fortress was given in honor of brave slave warrior Ayaz. Another fortress Tuprak Qala of I or II century AD can be translated as the clay fort. Khorezmian leader Artav used this fortress as a palace by constant wars and captures destroyed it. Night is in a hotel in Khiva.

Day 6: Khiva city tour
You will start to travel from inner part of the city-Ichan-Qala. This sight is encircled by strong walls. Here you will amazed to explore centuries old buildings, palaces, mosques, Madrasahs, Mausoleums, Minarets, Caravanserais and Bathhouses. This perfect city museum has more than 400 traditional houses and about 60 architectural monuments. In 1969 Ichan-Qala was announced as a historical and architectural conservation area. The most wonderful monuments here are the Kunya-Ark fortress, Muhammad Arang Khan constructed it in 17th century, Kalta Minor minaret and Tash Khouvli palace, an incredible sample of Khorezm architectural mastership of 1830s. Night is in a hotel.

Day 7: Khiva - Bukhara (440 km, 7 hours)
Today you will see the main sites of the city of Bukhara. In course of the tour you will see enjoy the beauty of more than 140 architectural monuments. Because of it this city started to be a "town museum" of the Middle Ages. You will enjoy the tour in city that is made of narrow streets, green parks and gardens, historical and architectural monuments that were made in different time. The road from Khiva to Bukhara goes through the Kizilkum desert and along the Amu Darya river. The river is known as the deepest one in Central Asia, which is formed by the merge of the Panj and Vakhsh in Tajikistan and flowing into Aral See. Upon arrival in Bukhara you will have free time. Night is in a hotel.

Day 8: Bukhara
In the morning, you will start your city tour around Bukhara.  First sight to explore will be the oldest citadel of the city, Citadel Ark (4th century). It was a residential place for many dynasties of famous Bukhara Emirs.  Next is Samanids mausoleum, it is the most exceptional monument of 9th-10th century's architecture. Chashma Ayub that can be translated as Job's well and Bolo-Hauz mosque that is famous due to the forty columns built in honor of Bukhara governor Abu-Fayud Khan are next destinations of the tour. After walking along the shopping domes and visit outstanding Lyabi House Ensemble you will have an excursion in Poi Kalon complex. This is the perfect example of architectural art of Bukhara. The sights of three buildings of the 12th - 16th centuries are Kalon minaret, Kalon mosque and Mir Arab Madrasah. Night will be in a hotel.

Day 9: Bukhara - Samarkand (290 km, 3.5 hrs)
In the morning you are going to directly move to Samarkand. It is one of the most ancient cities in the world. Upon arrival you will notice that the city is located in the valley of the river Zerafshan. Samarkand is known as the second largest city of Uzbekistan. During the travel you will enjoy the beauty of coeval city of Babylon or Rome. In course of the tour you will be impressed be the magnificent of sights like Registan square, Shakhi-Zindeh, Mausoleum Guri Emir and Bibi Khanum Mosque. Registan is a wonderful complex that is made of three fascinating Madrasahs. By being made in 15-17th centuries they are possess the beauty that no one can stop to admire. Shakhi-Zindeh is the next sight to travel. It is included to the list of UNESCO World Heritage Site. It represents the largest number of mausoleums going back to 11-15th centuries. Bibi Khanum Mosque was erected for favorite Tamerlane's wife, after his success in India. Overnight is in the hotel.

Day 10: Samarkand - Tashkent (train)
Today you will have plenty of time to explore the other sight of this wonderful city. Tours to this city will show Ulughbek observatory of the15th century. It was built by the order of local ruler due to which Ulughbek created the "Zidji Guragoni" catalog in 1437. This catalog is interesting due to possess the information about 1018 celestial bodies. Unfortunately, he was killed his own son. After the observatory, you will explore the local Broadway where you will be able to enjoy workshops, teahouses, souvenir shops and sweets. Oriental bazaar Siab will show you traditional handicrafts. Afternoon transfer to Tashkent is by train. Night is in a hotel.

Service does not include:
- Visa
- Full board
- Travel insurance
- English speaking guide
- Entrances to all museums
- Tashkent - Nukus flight from 90 $